Don’t Pin Down your Marketing Strategies with Pop-Ups 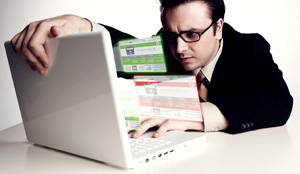 Please rest assured that HP is always striving to provide the best-possible user experience and can only do so with the type of valuable feedback you provided.

That’s probably what you would hear if you inquired with HP on why they are using annoying survey pop-ups on their website. Pop-ups are the irritation of Internet users everywhere. You have no options-you have to look at it to hopefully close it and move on with your intended mission.

How can such an irritating practice still be in use by so many?

The unfortunate truth is that pop-up ads have been successful in the past. As sad as it may be, countless brands have been transformed into household names with the use of pop-ups. They get consumers’ attention whether it be negative or, for a surprising few, positive. But if you wouldn’t consider telemarketing your customers for fear of what it might do to your brand, then why use pop-ups? These marketing techniques won’t build consumer confidence or help your brand reputation.

Here is a reality check before you jump on the pop-up, under, or over campaign. Forrester Research released a report indicating 64 percent of Internet users still find pop-ups “irritating”. That’s more than half of your target audience. At the same time, consumer usage of pop-up blocking software is on the rise, as well as the number of browsers offering the feature, making this irritating marketing campaign less effective with each day. Hopefully this will be enough to deter marketers from using this annoying technique.

One option is to have something where the user clicks on a link to see the pop up. For example, HP could create a non pop-up banner ad where on that site that said “Take our 2-minute survey and be entered to win $10,000”, then when the user clicked, it would open the pop-up survey. In doing it this way, they would be looking at a pop-up campaign that was a lot more effective with less irritation. And what is $10,000 to HP? A drop in the massive bucket.

If the above isn’t good enough to stop the pop-up urge, then consider your reputation. Pop-ups are extremely negative for your image and brand. Once your target market loses trust in your brand, you will have not only spent thousands on a damaging pop-up campaign, but now you will be spending thousands more to repair the dents in your reputation.