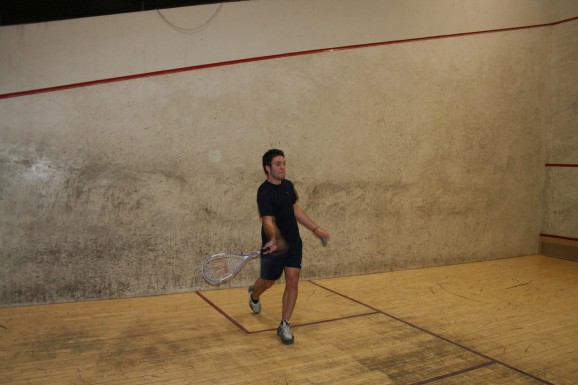 It was 9pm in Valencia, Spain. Mariano’s (my father-in-law) face was palpitating and red, sweat was beading down his brow, he couldn’t believe what had just happened… I finally beat him at a game of Squash.

Squash is a very competitive game and requires a high level of stamina. The game takes place in a small enclosed room with a high ceiling and you use a racket about 1/3 the size of a tennis racket.  It is is very fast paced and strategic. The objective is similar to Ping Pong and Tennis: Strategic ball placement that causes your opponent to flop.

When Mariano was in his 20’s he played in an amateur squash league in Valencia. He was one of the team’s top players and moved on to become an instructor and eventually own his own Squash club; needless to say, he loved the sport and dedicated a significant portion of his life to it.

Even though that was one of the only games I won against him, I attribute my success to one thing: Youtube.

Mariano initially introduced me to Squash. He was a very good teacher and taught me basic rules and strategies (the corners are the key to winning). There was only one problem with his lessons, I didn’t understand Spanish and wasn’t getting the whole picture: lots of subtleties were lost in translation. After many months of incessant loss and frustration, I decided to do some competitive research on my own.

With racket in hand, I looked online for English-speaking instructor videos. I ended up at Youtube.com and watched a plethora of videos ranging from basic hand grips to advanced striking techniques. After a few days of said research and practicing in our living room (something that Loli – Mariano’s wife – was not too fond of,) I was ready to challenge the king again.

Within a few days I won my first match. While the moment of success was euphoric for me, it appeared quite unsettling to Mariano.

My win was made possible by one thing: Crowd-sourced education. Youtube made it possible for me to learn Squash from a professional instructor in California while living in Spain. On top of that, the lessons were completely free and could be accessed whenever necessary.

Crowd-sourced educational resources such asYoutubeand theKhan Academyare changing education on a global scale. The doors to universal education are being opened as we speak via the backbones of the internet. Brick and mortar classrooms are not a requirement for under-educated children in third-world countries; all that’s needed is a cheap computer with access to the internet.